Yes, another Figma review from me, focussing on Mikuru Asahina Adult Version. I’ve been expecting this will turn out really great, but infact I’m a bit dissapointed to get her… There’s several reason why, & I’ll tell you 1 by 1 thru this review. First of all, Mikuru came from the popular light novel/manga/anime of “The Melancholy of Haruhi Suzumiya” by Nagaru Tanigawa, but this Mikuru is the older version of her. Adult Mikuru from farther into the future occasionally travels back in time to give Kyon some critical information regarding future events relative to his time span. Although the laws concerning classified information is slightly more lax in this Mikuru’s time, she is still unable to go into much detail and can only provide short, rather vague pieces of information. Since she has no memories of meeting her older self, adult Mikuru has to take measures not to be seen by young Mikuru in order to avoid a time paradox. Yet, despite all these precautions and limitations, she accidentally lets slip a small bit regarding the star-shaped mole on her chest, which she never knew she had until Kyon told her about it, when proving that she really was Mikuru. Kyon was completely unaware of this mole until she told him it was there, despite the past fact that she didn’t know about it until he told her. He later related the mole to her younger self after confirming it in some photographs, thus creating a minor paradox. In order to time travel, Mikuru uses a Temporal Plane Destruction Device (TPDD for short), which connects with information in her head to successfully time travel. She also has the ability to render people unconscious. She uses this on Kyon to prevent him seeing her time-travel methods, whilst adult Mikuru uses it on her younger self to avoid being seen by her. In order to differentiate between the older and younger versions, whenever the older self is present in the same time span, Kyon refers to her older self as Asahina-san (big) and to the younger Mikuru as Asahina-san (small). Despite both names ending in -san, the differentiation is in the inclusion of (big) and (small) that is written in the light novels. When a Mikuru from eight days into the future appears in the seventh novel, The Scheme of Haruhi Suzumiya, Kyon gives her the alias of her twin sister Michiru to use in front of Tsuruya, referring to this Mikuru as Asahina-san (Michiru). And so now, Mikuru Adult Ver. is packaged by a white & dark pinky colored box, & the series number is 071 which is known that she’s a standard release. Adult Mikuru doesn’t comes with a quite amount of accessories for her, especially due to the limited space on her box because of the desk & chair parts….

Yup, there she goes… 2 extra face plates but one for her younger version, School desk with chair, stand set, & extra Interchangeable hand parts. But, wait?! Did I noticed something’s not right? Uhmm… Might just my silly imaginations, unless if I see this image in a larger view.

Mikuru is shown to be wearing a formal office/teacher’s white suit which made her looked like a gorgeous office/teacher girl. On her left wrist, she had a gold like colored bracelet, the rest is she’s wearing a black colored short tight skirt with black underwear, pantyhose, & black high heels. Mikuru is made from painted ABS(Acrylonitrile Butadine Styrene), PVC(Polyvinyl Chloride), POM(Particulate Organic Matter), & PP(Polypropylene). The articulations & substance are great, using the smooth yet poseable joints of figma, you can act out many scenes, A flexible plastic is used for areas such as the blouse and skirt, allowing proportions to be kept without compromising posability. Unfortunately, it’s really out from my expectations… She’s even worst than Nene, her skirt is made a bit hard & too tight, making her cannot lift up her legs freely…

So far this is the only height that I can do to bend her thigh articulations, my Nene is even better, her skirt is more flexible so I can still lift up her legs fully, although it cost me to force her skirt to be over stretched. Perhaps, it’ll get me more depressed if I attempt to do Mikuru’s full leg lifting pose… T_T

Adult woman has always been too gorgeous for me, I just love adult woman… Her face were also faithful to her anime/manga counterpart. Here, we got a normal smile expression(it was already patched into her hair), a very standard expression from figma though but I like it. 2nd is a wink expression that used for her during the famous scene of “It’s classified information”. However, this wink expression can be used for various scenes so it’s really common used expression imo. & last but not least, is her sleeping face that designed for use on the younger Mikuru. But luckily, it fits on her adult versions too, so I won’t be bother myself to buy her younger version. Much like my Shana, Mikuru also has a wide faces making her face looked puffed-up like a baby face, truly like most anime characters that supposed to be cute. But Mikuru’s face shape is shown to be more oval than Shana. Overall of her head’s sculpt quality is exactly standard like my other figmas. 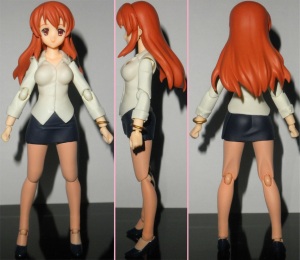 Front, Side, & Back View

Alrighty, Mikuru got an orange colored long hair close to her younger version, & as usual… The sculpt is great but the material is made thick, which means I cannot tilt up her head, & I can only make her looking downward & rotate it. Mikuru’s blouse is made pliable that allow us to make a scene where she expose her breast revealing her star shaped mole, & not only that… We can even take it off from her since in the middle of her blouse was glued resealable, but I don’t do that for this review since I don’t want to do out of my league on my pricey figure… Overall, Mikuru might looked gorgeous & sexy, only… Her design was actually, too plain made… So, she might only win from her body proportions among other figmas, but for me I like her just the way she is because I don’t expect something really fancy for her….

Now, to her parts! GSC included her a desk and chair to recreate the classroom from the show. But, they were supposed to be a student’s desk & chair… So, I think this parts aren’t mainly for her, but for her younger versions or other figma school girl. The parts were a brilliant made, very2 intense details on them. I like this parts more than any other parts from my other figmas actually, GSC did a pretty splendid job. Unfortunately, to make the figma(not only her but others too) sit on this isn’t easy as I thought… So kinda out from my expectations too, or maybe I’m just being too soft on handling them. It took me 4 or 5 minutes to make Mikuru sit on the chair at my 3rd photo, even still looked inaccurate for me but I did my best on them. 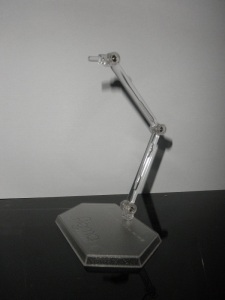 Well, we all know a poseable figma stand is included, which allows various poses to be taken for posing our figma. Very standard stand set  much like my Figma Nene. Perhaps, since it looks different for me, Mikuru one looked more shiny & very clear than the rest of my figma’s stand sets. 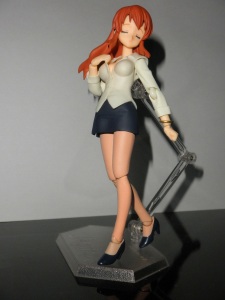 Atlast, her interchangeable hand parts! In here, from the attached to her box, she got a pair of fistful hand parts, outstreched wide open palm(standard parts included in every figmas), a pair of pointing finger parts(can be used to make “It’s classified information”‘s scene), a pair of holding hand parts(Like Lum, I don’t know what this is supposed to do for her faithful scene), & finally extra pair of open blouse hand par… Wait the minute?! Didn’t we notice something’s wrong earlier? AND WHAT THE HELL IS THIS? Why there’s 2 right hand part? Where’s the left one? Well, it’s hard for me to say… Since the previous figmas that I owned, GSC never dissapoint me. But this time GSC definitely is to blame… They misplaced another open blouse right part, instead of left part for me. In that case I cannot do the scene of revealing her star shaped mole, I’m terribly sorry for the readers… T_T 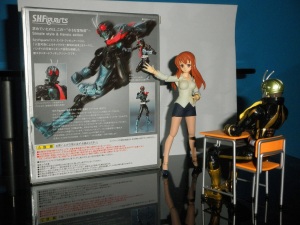 That’s it! The best that I can do to review & handling her… Mikuru Asahina Adult Ver. is my 4th owned Figma collections after Lum, but it’s dissapointing for me to grab her since I missed the left open blouse hand part, also she turned out far from my expectations, & more worst… I got this with quite expensive price, although I can still got a little down price from the seller! Yes, this is the reasons why I’m unhappy to get ahold her…. T_T The only thing that made me happy is, she’s totally in a very2 good shape & the desk & chair part.

Pros: Another solid product from MF & GSC & if you’re a fan of The Melancholy of Haruhi Suzumiya/Mikuru/adult looking woman/gorgeous looking poseable figure, then this is a worth buy… I love the way they did the details much, but I wouldn’t recommend you much if you’re only focussing on having poseable figure… The material of her pliable blouse is so flexible, on the begining I thought it’d be hard to do the open blouse scene, but I find it really easy. & eventhough I’m unhappy to grabbed her, but I’m quite cheered by her charming looks anyway….

Cons: I said it myself, so you know it’s the truth! The white blouse material is easy to get dirt, so make sure to wash your hands before handling her. Although she had a great articulations on her legs, I cannot do some several pose that I desire because of the tight skirt she had. & because of this… To make her sitting on the chair with desk came to be hard enough. Lastly, small issues that I had… Man, how do I put this? It bothers me much on missing the left hand part, yet again I cannot complain to GSC… Since they can no longer supply replacement parts for figures that are over a year old. & why must the open blouse hand part? I wouldn’t mind if they misplaced the other hand parts besides open blouse since I can use other figma’s hand parts… It’s pity that the open blouse hand parts is also part of the main reason why I wanted her… 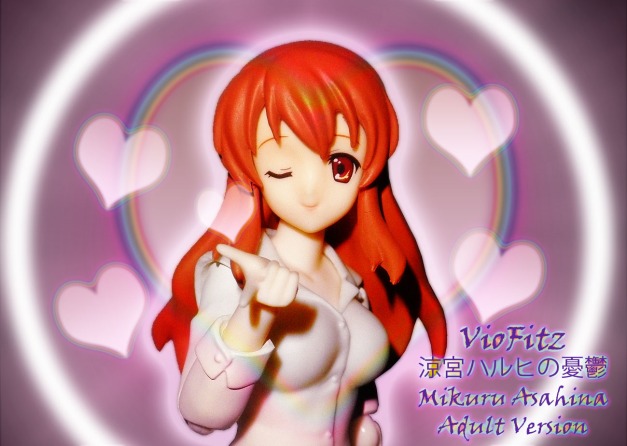 Mikuru: “Thanks For Reading….”