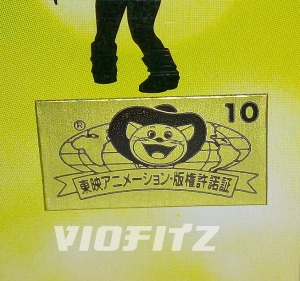 As requested I present you, Dragon Ball Styling: Chi-Chi review! Why her? Well, I was asked by a friend to do review styling, in reward he’s willing to give me this styling figure. That reward actually got me since, frankly in the very early Dragon Ball series, Gokou & Chi-Chi used to be my favorite couple but, until Akira made her fully grown up & married with Goku. I completely changed my mind so, I think the Chi-Chi I like is only this version. Chi-Chi is the daughter of the Gyumao who later marries Son Goku and becomes the overprotective mother of Son Gohan and Son Goten. First introduced as a shy and fearful girl, but, as she gets older, she develops a very tomboyish, tough and fierce personality, which sometimes causes her to have anger outbursts seen several times throughout the series. Okay, enough, I’m sick of telling her current personality, I better start the review now. Since, I’m not quite familliar with this line, I’ll just telling what I found out from handling this figure. Chi-Chi’s box was designed having blind box meaning we cannot see the contents & it was colored green yellow-ish & blue white-ish with the promotional pic of the figure on the front box. There’s also somekind of character introduction written in english but, the main promotional pic is blocking half of the introduction. On the back view, we get to see most of Chi-Chi’s figure informations written all in Japanese with some print of the prototype uncolored figure & the sketches. In one of the uncolored prototype photo, Chi-Chi is shown holding her famous Basho Fan which is not included in this version. There are 2 versions of this Styling Chi-Chi, which is regular paintjob which was released regularly cheap, & the other one is the metallic paintjob with the bonus of basho fan which was released exclusively expensive. For me, that’s just too damn cheapskate & stupid for not including the basho fan on the regular paintjob… The upper box also got golden Toei sticker, meaning she’s a japan import? Styling was also considered as a candy toy since there’s a candy included. Well, let’s take a look inside the box then. 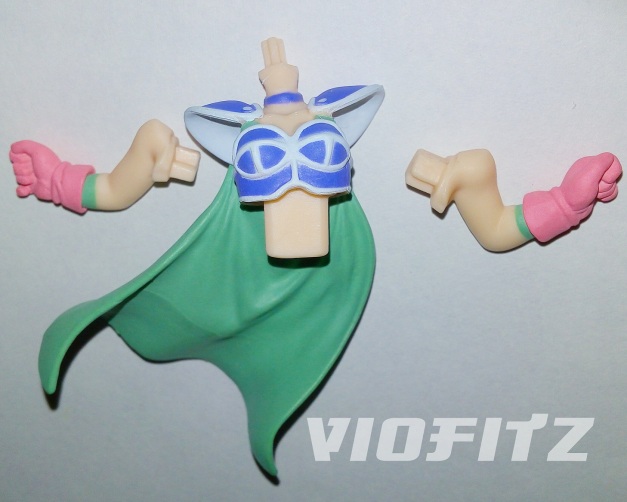 Most of the contents are part of Chi-Chi’s body with alternate Head, Display Stand, & Candy. Chi-Chi’s 2 arms also removable, this was supposed to swap her arms with the one holding the Basho fan. Unfortunately, the arms with Basho fan wasn’t included in here, which is mega lame & what’s the point having her arms removable.

First thing you need to do is attaching her upper torso/chest, followed by attaching one of her head. The joint style was a peg shaped.

Voila! Very simple indeed, you don’t even need instruction manual just to do this because they didn’t include one. This version of Chi-Chi came from her very 1st appearance in the early Dragon Ball series, depicted as a tough young woman with long straight black hair & a lighter skin color. As a child, Chi-Chi’s appearance consisted of a blue bikini, pink gloves and boots, a green cape & her pink helmet. Chi-Chi kept this appearance until Piccolo Jr. saga. For a candy toy, I have to admit this line is a real focus as well dealing with her details although she felt very simple to look at. She’s looking pretty decent to me, most of Chi-Chi’s body mold is a shiny flesh color, the bikini & her green under gloves & socks was painted. The paintjob was done in a crisp although, the misspaint or anything are still presents but, It’s tolerated so far as long as they don’t bother her looks much. The figure’s material is a complete PVC & ABS made, & she’s 9.5 cm tall. Chi-Chi’s proportion wise is a little girl’s body, heck… Loli indeed! Her posing is standing with her legs a little bend, almost in cross positions, while her upper body was bend to the right side, making her head not standing quite enough & the cape is also flowing to the right side. Well, nothing else you can do on this because she’s completely an unarticulated figure.

Chi-Chi’s face was done very nice so far, her kid faces looks really prominent & adorable. Her eyes is dark blue while eyelashes appeared to be a dark red purple-ish, it’s kinda funny to see how differ of her eye color between her eyelashes… Chi-Chi already did her own make up since her childhood for sure. Chi-Chi is given with 2 alternate head sculpt & each of them got their own expressions. Without the helmet one, Chi-Chi looked like she’s scared or digusted of something with her eyes looking to the left side, I’m loving her hair so far but, It’s quite funny to see her fringe bangs got a seamlines, like they’re removable but, they’re glued. & the helmet one, Chi-Chi shows some cheerful expression, like she’s happy with her fashions. Too bad the faces cannot be swapped at all, I was hoping for something more to make her worth to have. Also, throughout the whole DB series, kid Chi-Chi is never seen without her helmet as she always kept her helmet’s on until Piccolo Jr. Saga. The only thing she removed was her blade on top of her helmet for attacking the T-Rex like animal when chasing her, while the figure itself was glued. 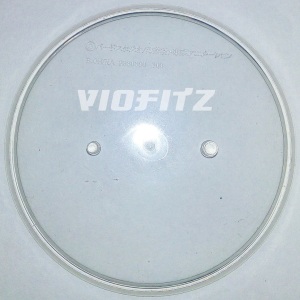 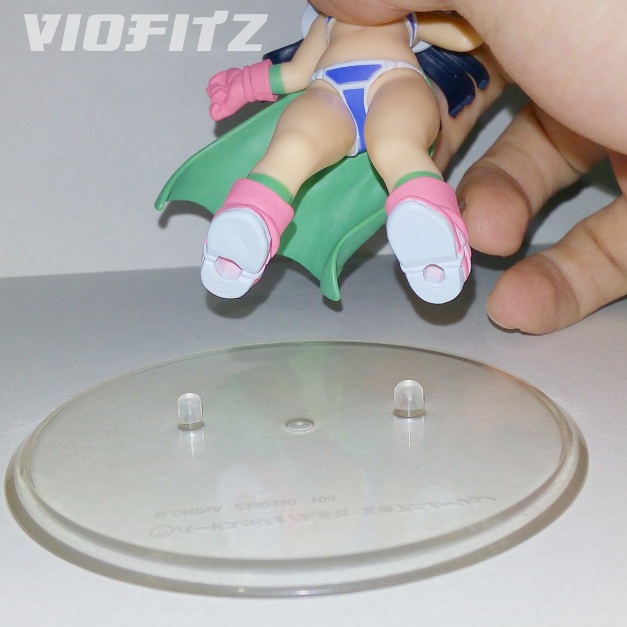 Bandai also included a single display stand for maintaining the figure balance, the display is a thin & clear colored table with 2 pegs to attach the peg hole on Chi-Chi’s underneath boots. If you pushed too much, the table would sticked to the ground for a few moments.

It’s a candy toy, so she was included with candy blue colored. Unlike Shokugan CT 66 Action Kamen Rider, the candy is a chewing gum rather than a hard candy. I can tell by the looks since I’ve seen so many chewing gum made exactly like this. It taste sweeter than the shokugan CT 66 candy one…. 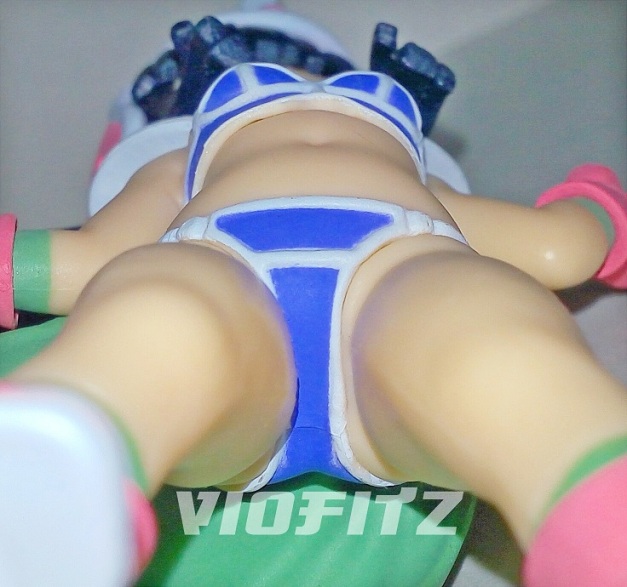 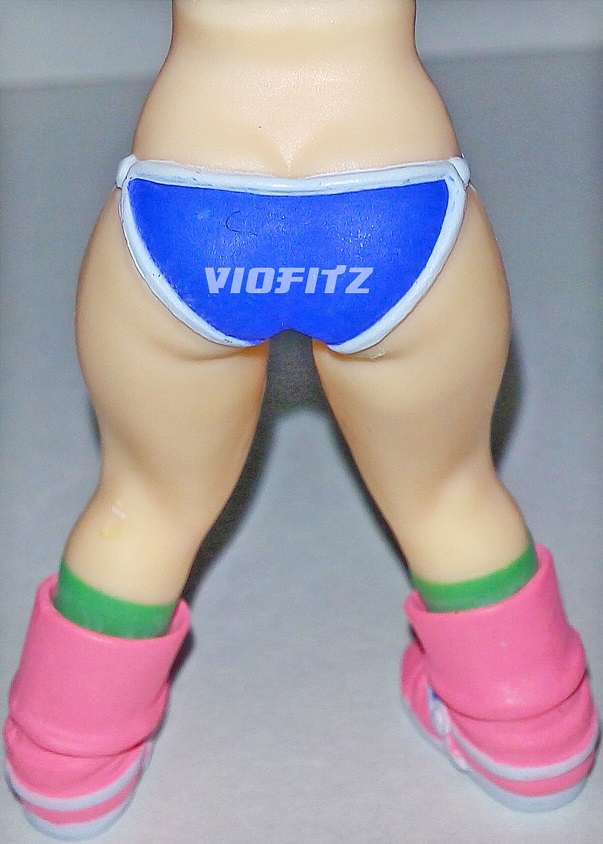 Well, uh… I’m just quite admiring how they did well shaped her child body, Chi-Chi’s body was sure sculpted pretty intense. You can see the shape of her butt cleavage & even the shape of her under butt between her thighs, her belly button was also finished quite prominent. The shape of her boobs was also presents despite being a little girl.

Eventhough Goku is far taller but, SHF was actually in smaller scale than Styling because as a kid, Chi-Chi appeared to be a bit bigger from her proportions for SHF. But, it’s still fit enough to see them like father & daughter… But, Gokou is her husband!! 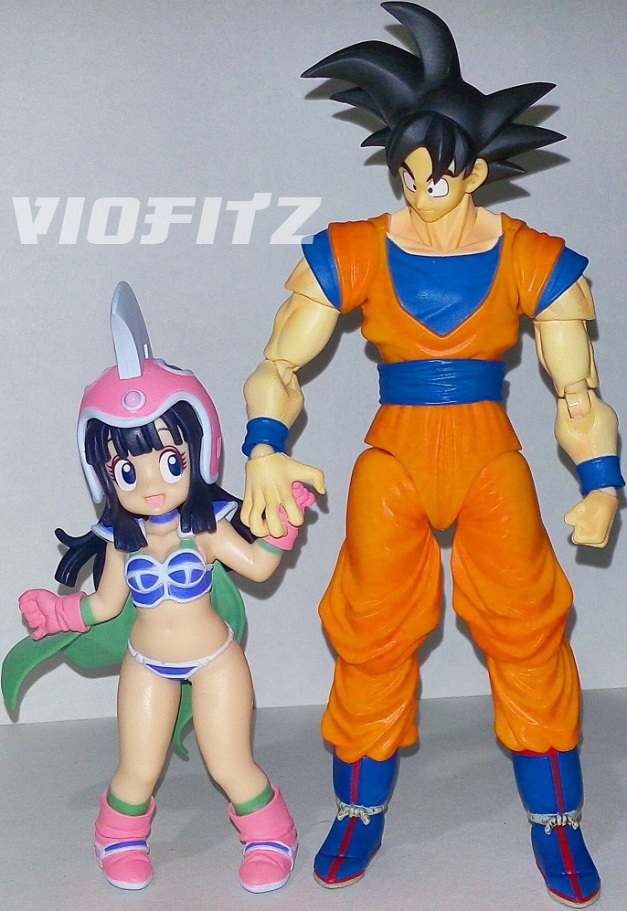 Chi-Chi: “Hi, there… I think I know you somewhere…”
Gokou: “I never thought you’d still this small, babe.”

My overall thought is, this is a fine figure to be add for your DBZ collections. Chi-Chi was finely made so far but, yeah, the one thing’s missing is the alternate arms holding the Basho fan part, which is unfortunate that we can’t do anything with those removable arms feature. & for a candy toy, styling is very worth to have as the accuracy of the figure looks overwhelming. Perhaps one of the best existing figure of kid Chi-Chi, however… I think this still can’t be compared to the metallic paintjob version since she got more better coloring & given extra accessories of Basho fan. I’m not going to review that version because I’m not interested on getting all of her versions. 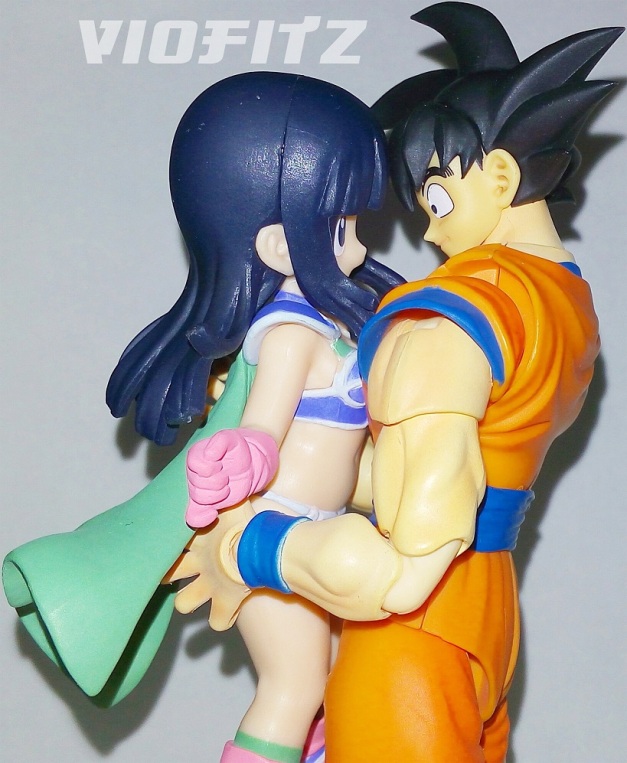 ……. That’s one loli chick you got Gokou!

Gokou: “Babe, you cracked me up, here’s a present for you… We’ll get married?”
Chi-Chi: “Agreed”

Oh, well… Thanks for reading there….