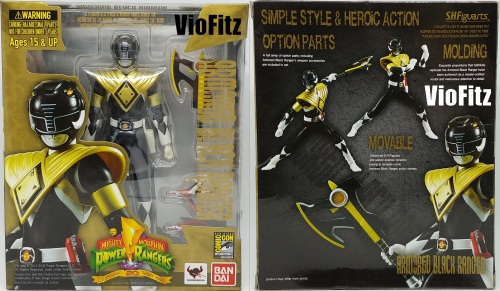 This time we make an oyster soup!! Atlast, 5 years waiting was worthed for this figure, it’s an exclusive figure for Mighty Morphin Power Rangers (MMPR), S.H.Figuarts Armored Black Ranger by Bandai Tamashii Nations!! First up, Armored Black Ranger is a result of the Green Ranger lending his Dragon Shield to the Black Ranger temporarily when he was poisoned by the acid gel of Oysterizer attacks. The identity of him is clearly Zack Taylor Black Ranger wearing Tommy Oliver’s Dragon Shield, this form of Black Ranger was only one time appearance in the episode of “An Oyster’s Stew”. This episode contains Toei’s Zyu2 footage which exclusively made for Saban, Zyu2 is a fan coined term given to the footage developed exclusively for the American television show MMPR that did not derive from stock footage of the Super Sentai series Kyoryu Sentai Zyuranger. First appearing after the episode Doomsday, Zyu2 footage is used for monster battles in the latter half of the first season of MMPR and the first quarter of the second season. Saban was pleased at the ratings of the series, and was eager to create more episodes, however, the series had exhausted all of the monsters used in Kyoryu Sentai Zyuranger. So he contacted Toei Corporation and Rainbow Productions, to produce more new Zyuranger footage. The companies agreed and 25 episodes worth of new costumes were created and in-suit battle and mecha fighting scenes were filmed in Japan. The footage was created and sent to America where it was spliced with American footage in a similar fashion to the rest of the MMPR before it. It was also requested that themes present in the Power Rangers series were placed in the new footage. Yeah, what made this special is because Armored Black Ranger scene doesn’t exist in the original Zyuranger series and interestingly, Bandai agreed to Bluefin to make the figure in favor for the exclusive Zyu2 footage of MMPR season 1. The figure was released somewhere in 2014 which sold exclusively in San Diego Comic Con (SDCC) 2014. The box even has printed SDCC logo while the overall box was colored gold added with some fx motives on it. The inner tray paper was colored plain gray, the back view was colored overally black grayish and only features promotional photos of the product and several descriptions. The box was designed for US Market Ver. only since there’s no Armed Mammoth Ranger in Zyuranger, the quality of the box looks very poor as they looked very thin and seemingly very fragile compared to the every SHF figures I owned. When I hold them, it feels like holding a bootleg box quality, idk if this is just me or there’s actually a bootleg version of this but, so far I never encountered any SHF Zyuranger/MMPR bootlegs. But, it doesn’t really matter because the figure itself doesn’t feel like a bootleg figure after I open it. 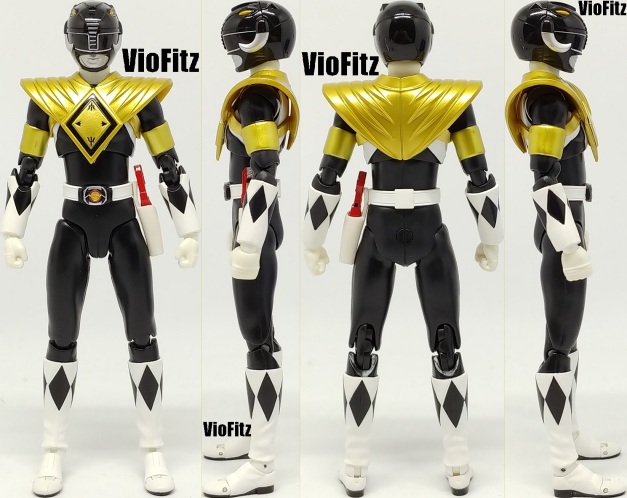 Armored Black Ranger in the show

Zack Taylor was a student who attended Angel Grove High School. A very enthusiastic, upbeat person, Zack is a prankster and particularly enjoys holidays such as Halloween, to scare his friends; in contrast he was greatly afraid of bugs and snakes, a fear he partially conquered when he fought the monster Spidertron. He and his closest friends Jason Lee Scott, Billy Cranston, Trini Kwan and Kimberly Hart are selected by Zordon and Alpha 5 as the five “teenagers with attitude” to become the original Power Rangers and defend Earth from the forces of the evil Rita Repulsa. When Zordon first confronts the teens to give them their powers, Zack becomes the Black Power Ranger, and is given the Dinozord Power Coin of the Mastodon, obtains the Mastodon Dinozord (a colossal assault vehicle). Like his Zyuranger counterpart, Zack is also the second-in-command to Jason Lee Scott. Zack enjoys dancing at every chance he gets, and even developed his own fighting style, Hip Hop Kido, which he occasionally taught. He would using this skills during his unmorphed fight with the Putties but, he never actually show this skills in his ranger form. As the Black Ranger, zack sports black spandex with a diamond shaped white motives on his upper body, white colored neck collar, white belt with Power Morpher, boots, and gloves. Each boots and gloves has red diamond shaped motives and there’s also a white colored Blade Blasters holsters. Only, in this version he’s wearing Green Ranger’s Dragon Shield. I haven’t found an actual photos or clear shot of Armored Black Ranger but, It can be assumed this edited photo would be the closest and the only clear source looks of him atm. Comparing between Black Ranger suit, in Zyu2 footage we get to see that Black Ranger suit seems to have shiny metallic colored black. However, in this figure they’re not actually follows Zack’s actual proportion since this is the same body of SHF Mammoth Ranger based on the suit actor but, Walter Emanuel Jones’s proportion in his younger days looks similar although, it’s still inaccurate if to portray the actor’s actual appearance. Since the figure got the same body of SHF Mammoth Ranger so, I’m going to skip on how the articulation works. This review is going to be focussing mainly on his quality with his other accessories and of course… Comparison between the regular form.

Well, he got the same SHF Mammoth Ranger’s helmet… Which the helmet didn’t look show accurate at all but, the sculpting is still the same to the boxart photos, so I can’t complain much on comparing the actual product between the boxart. Except, the paintapp quality isn’t as good as Mammoth Ranger but, it’s minor.

You got that, right! Your yesterday’s news! 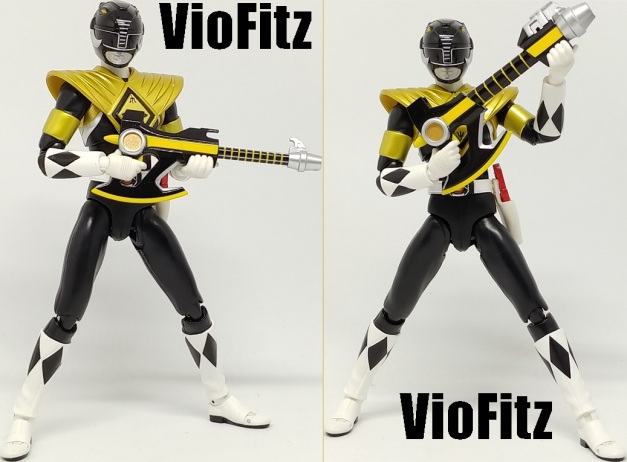 Alright! I’m gonna find what this is all about! 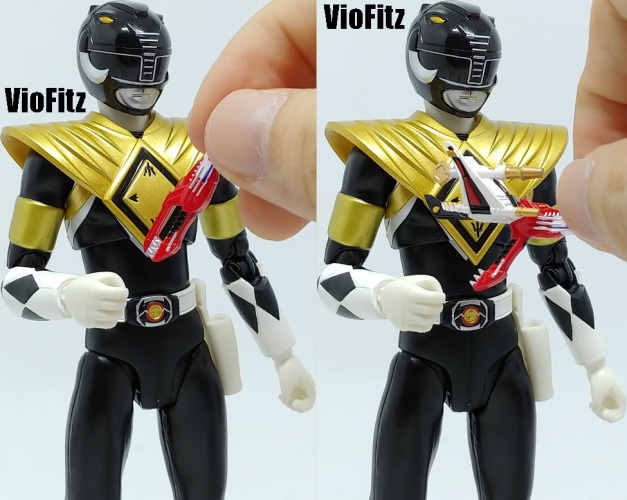 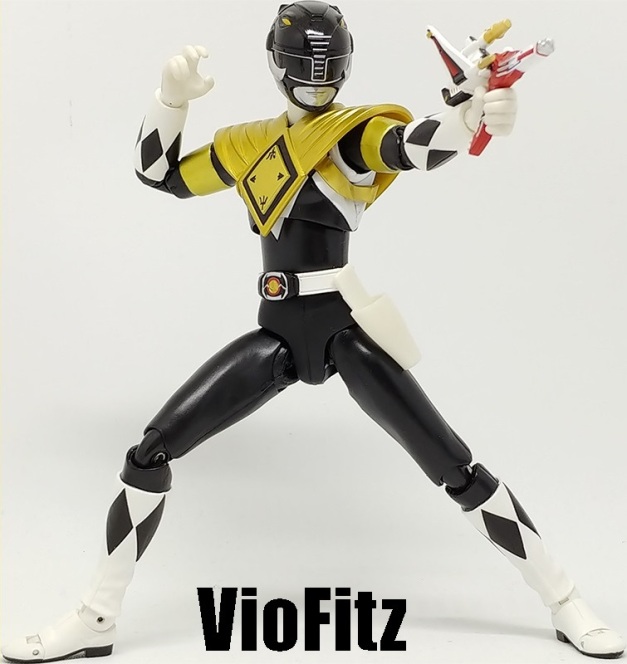 Ranger! Fire at will!

Armored Black Ranger comes up with his Power Axe (Axe mode), Blade Blaster and Thunder Slinger. These are the recycled weapon accessories from the original Mammoth Ranger. The sculpt, paintapp, material and everything… All the same… However, these accessories are merely bonus for him because in the show Armored Black Ranger is never seen using his weapons at all. Since this is an exclusive release, the Howling Cannon parts was left out which I’m fine with that but, really wished they’d also include Power Axe gun mode as an exclusive accessory instead of only Dragon Shield. 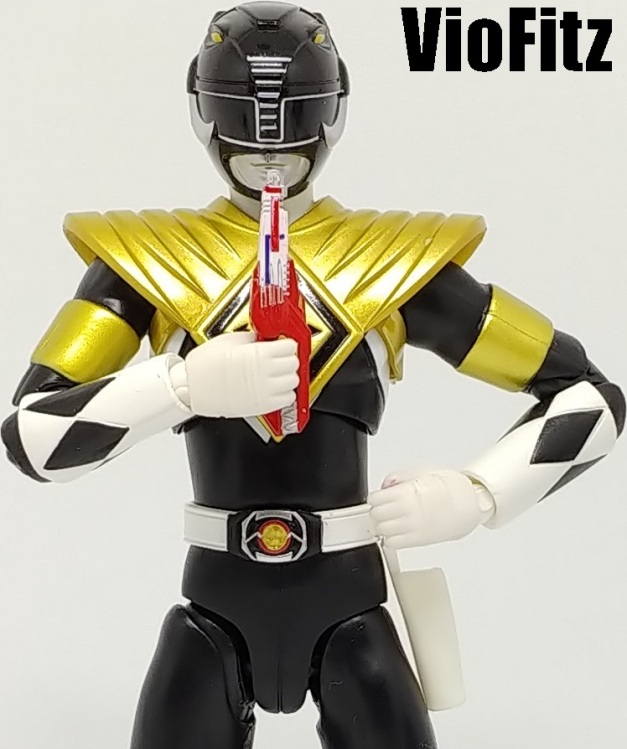 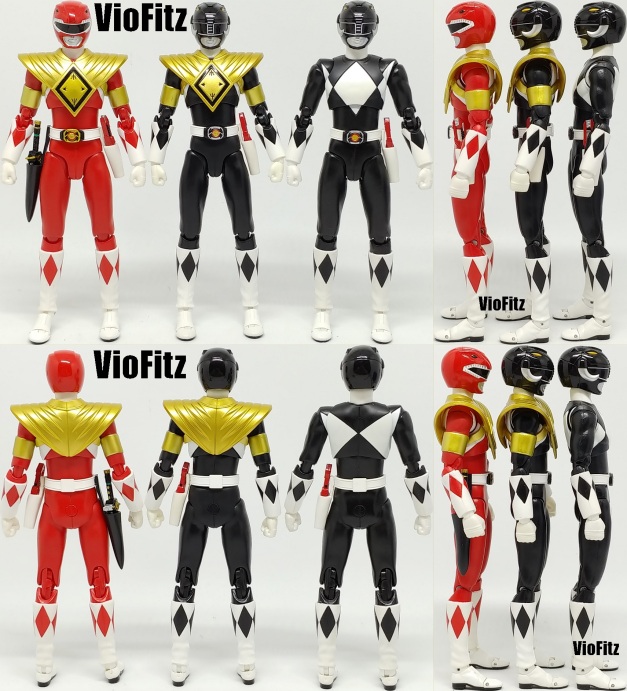 The same goes to all of his accessories, everything is indeed the same and I didn’t spot any difference at all. However, If you can spot the differences, please kindly tell me, because I could be missing something. 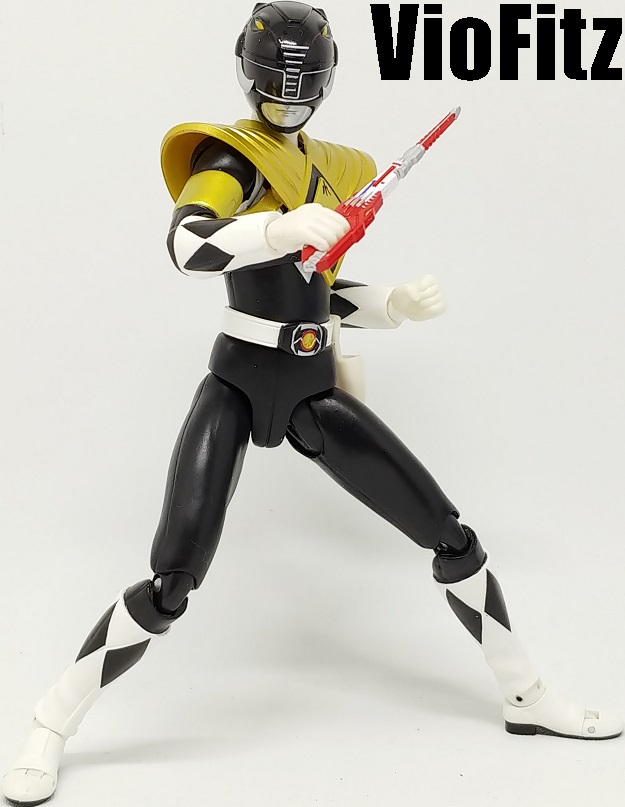 I will end Rita’s menacing plan!! 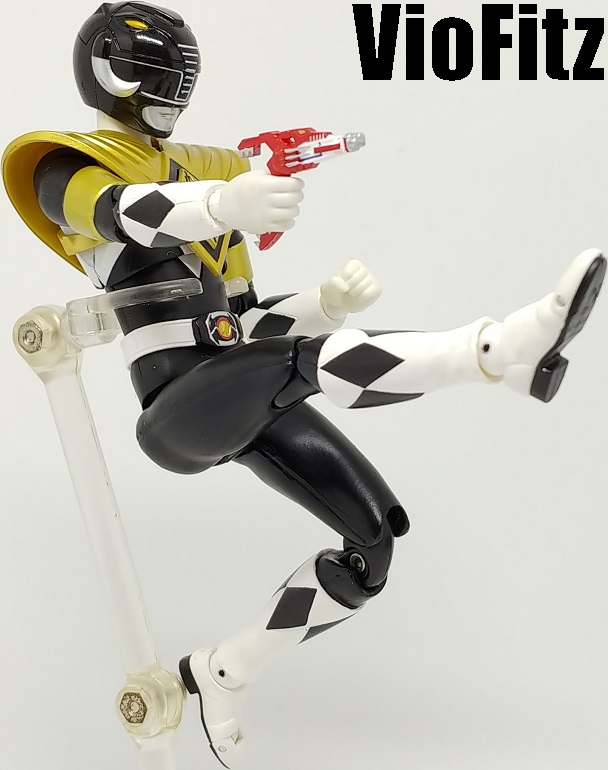 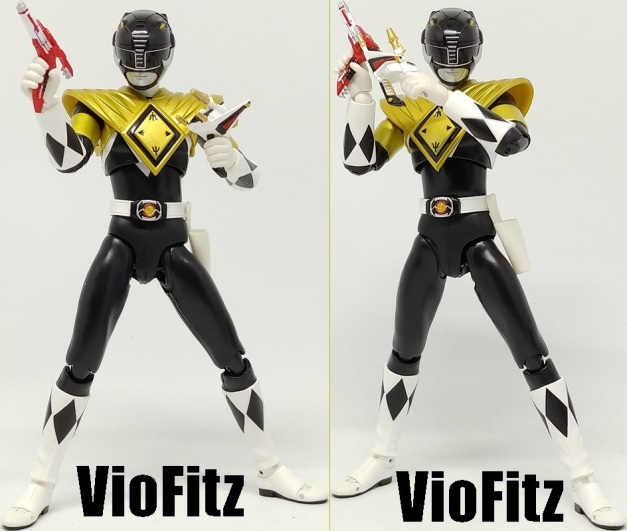 Get ready for the final shot! 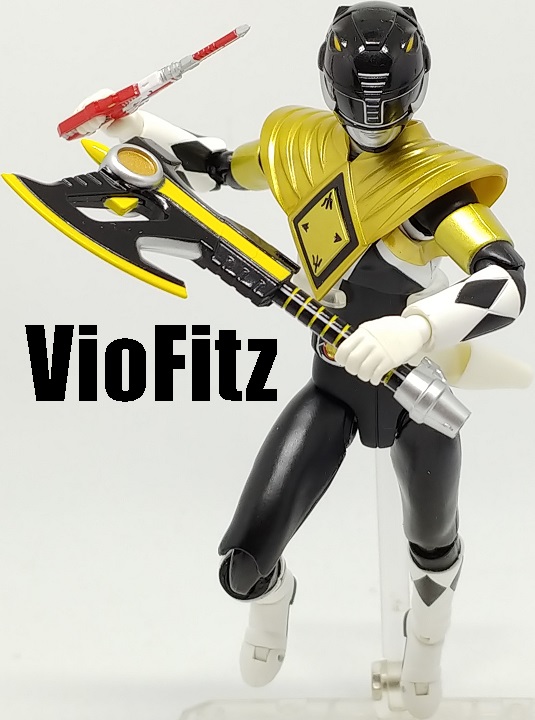 If you’re not satisfied with his limited weapons, you can always use your SHF Tyranno/Red Ranger’s accessories (if you owned one) to recreate Armored Black Ranger using his own Blade Blaster Gun/Sword mode and the actual Thunder Slinger. Although, you don’t even need this eversince Armored Black Ranger never use his weapons at all. But, it’s still cool enough to see him in action using these weapons.

Green Ranger: “The Powers will heal & give you the energy!” 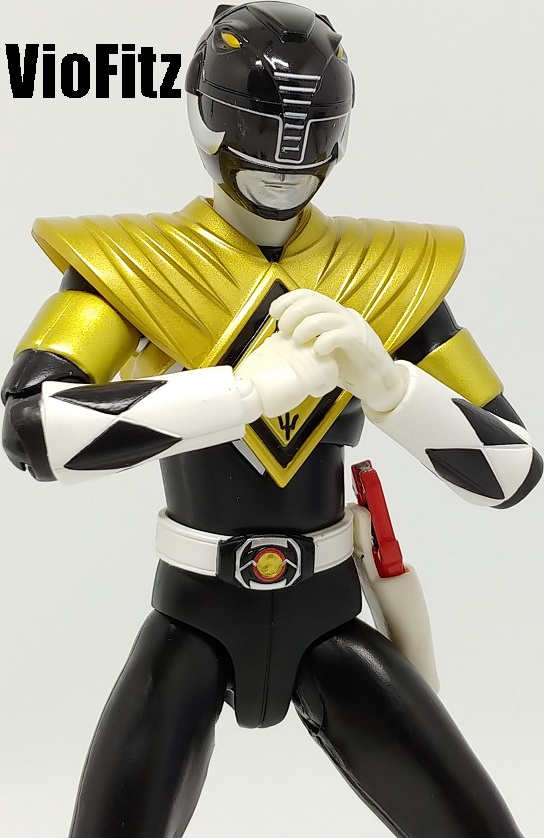 Yeah! That should break the spell!

Overall thoughts, it feels like playing the same Mammoth Ranger figure but, mixed with Armed Tyranno Ranger. However, despite being an Event Exclusive release Armored Black Ranger’s current price is quite stable even several countries sells him less than $60 and to shock you I got him for only $42 brand new unopened but, on the other hand, SHF Mammoth Ranger’s current price skyrocketed alot. Frankly, I don’t recommend this much since he’s just a complete recycled figure of Mammoth Ranger and Armed Tyranno Ranger and this form of Black Ranger only appeared less than 35 seconds. However, if you prefer this better or a completist I say get him while you still see him reasonably stable/cheap. Anyway, perhaps this review will be the last review of my owned SHF Super Sentai/MMPR figures since all of my wishlists are currently finished on hunting Dragon, Tyranno, Mammoth and KibaRanger. However, there maybe another review if Bandai plan to renew the series or if I want to do some custom figure review.

BLACK?! I will take you down!! 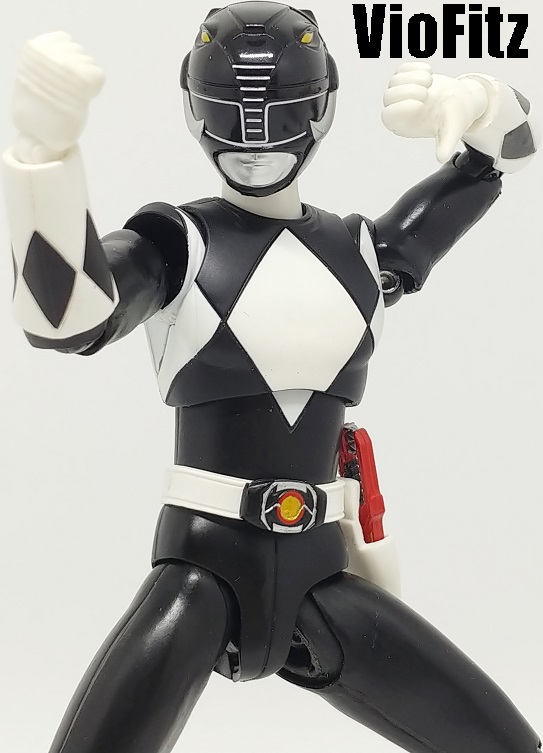 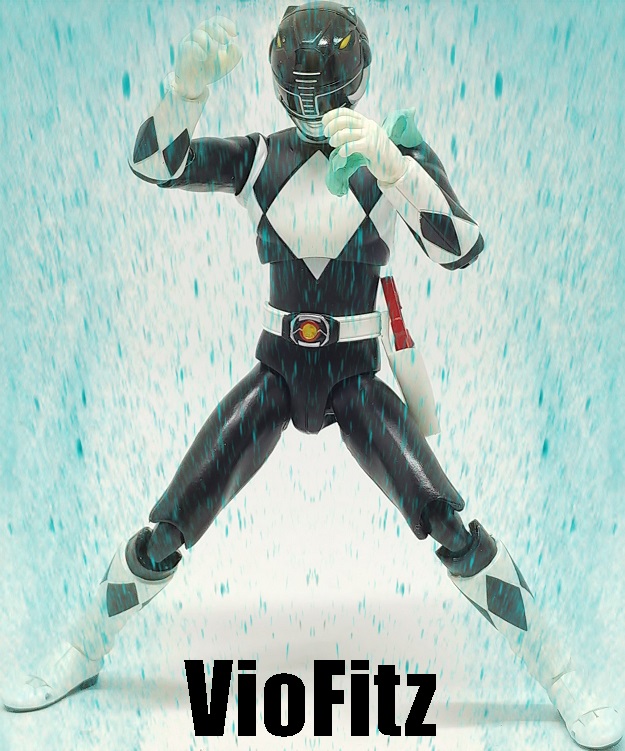 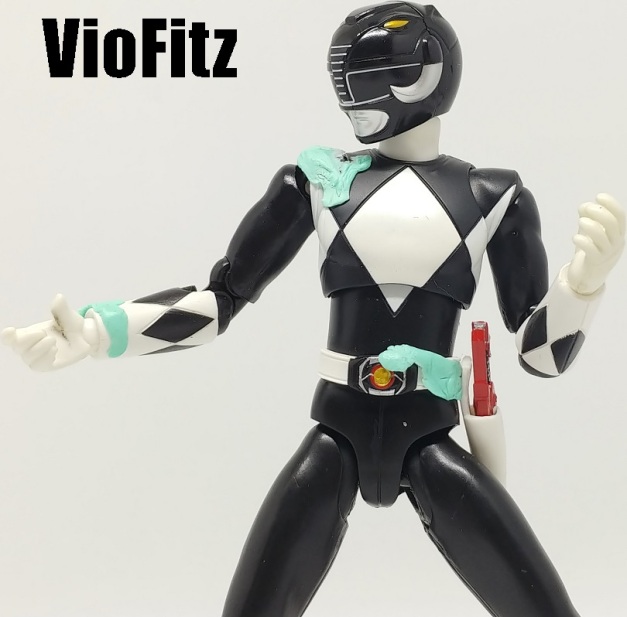 Acid Gel?! I never know Shadowmoon can do this!

Neither do I know that…

Shadowmoon: “You talked too much!!”
Mammoth Ranger: “GAHAAKKHH….” 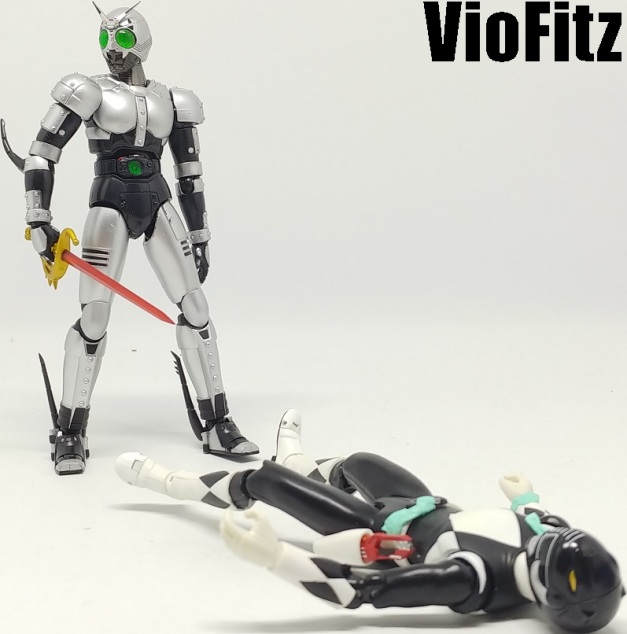 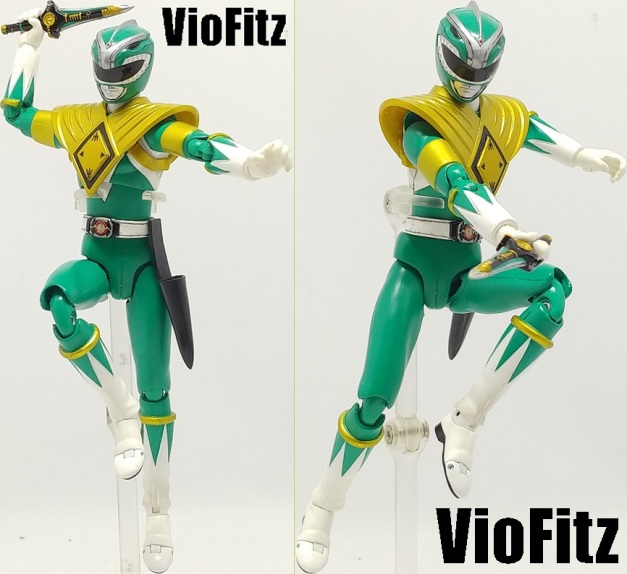 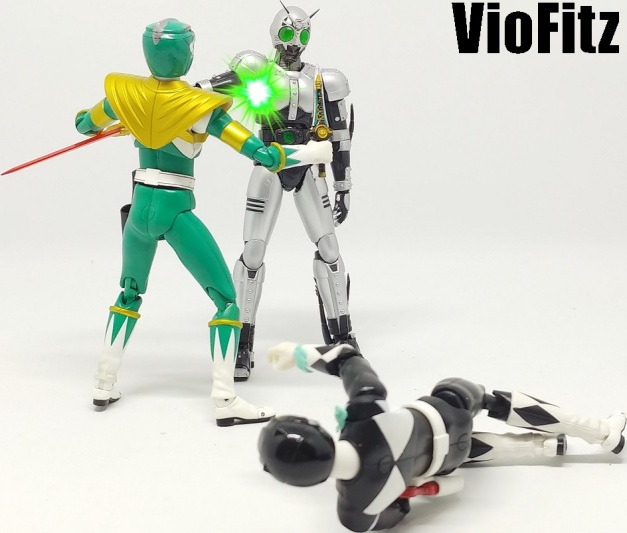 So much for the legend…

Shadowmoon: “Whazzat?!”
Mammoth Ranger: “He’s not one of mine! But, I can give you a good challenge for you!”
Shadowmoon: “Very well! Do as you must!” 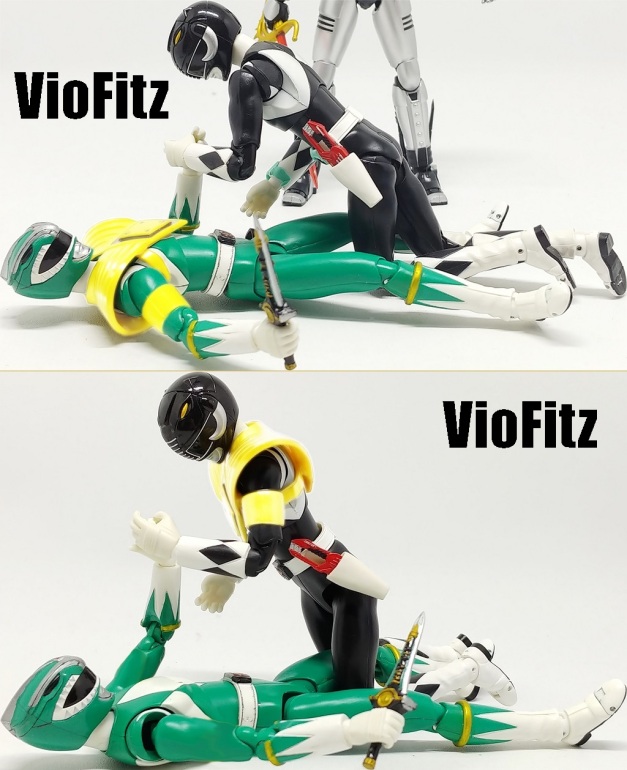 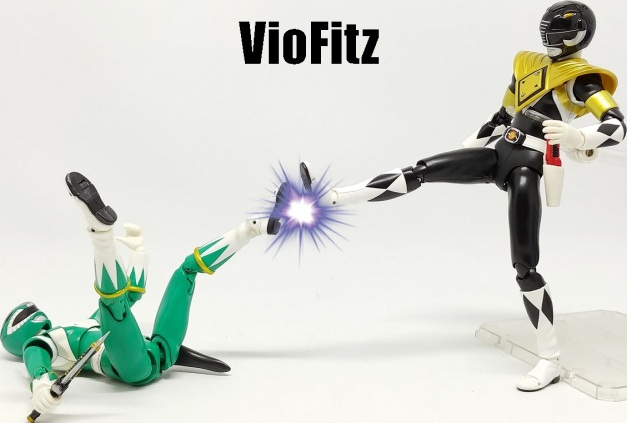 Mammoth Ranger: “Now, get lost! This is my role to go!”

Mammoth Ranger: “Are you ready, insect?!”
Shadowmoon: “You sure wasted your time! But, you looked better with that gold!” 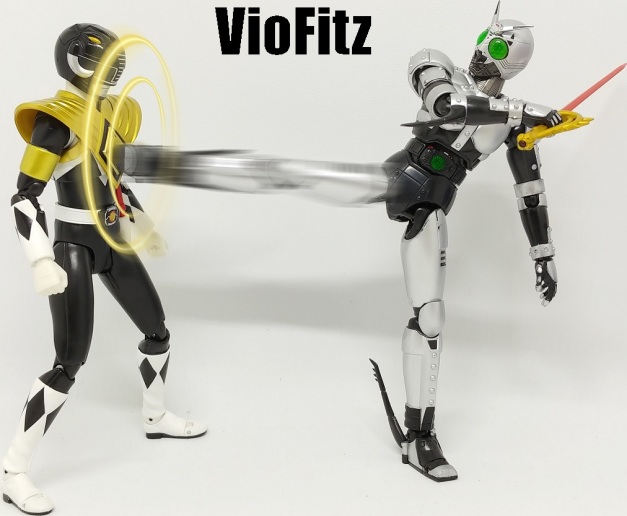 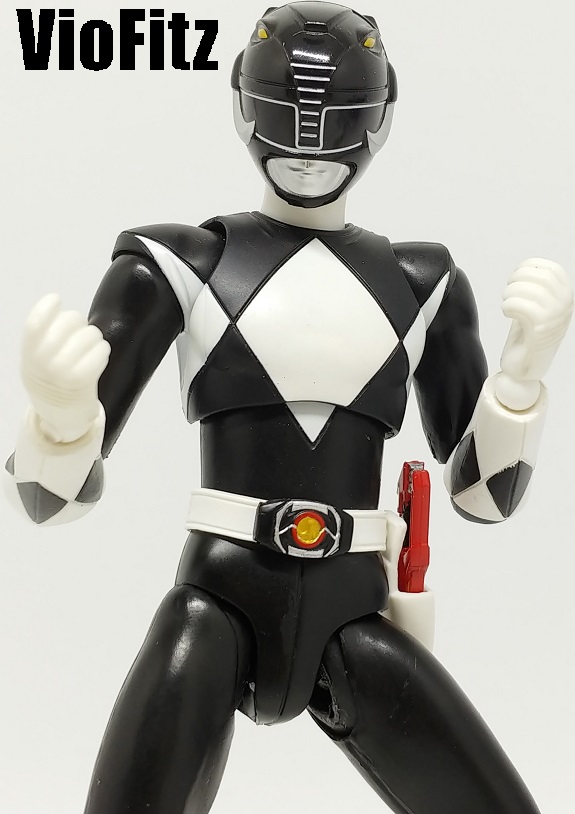 What the… Where’s my Dragon Armor?!

Uh’oh… Your time is up! Armored Black Ranger only appeared half a minute….

Fufufu… So, the table has turned!

Wait, wait… I was only kidding….

Just fight him with your Mothbreaker, dude!! 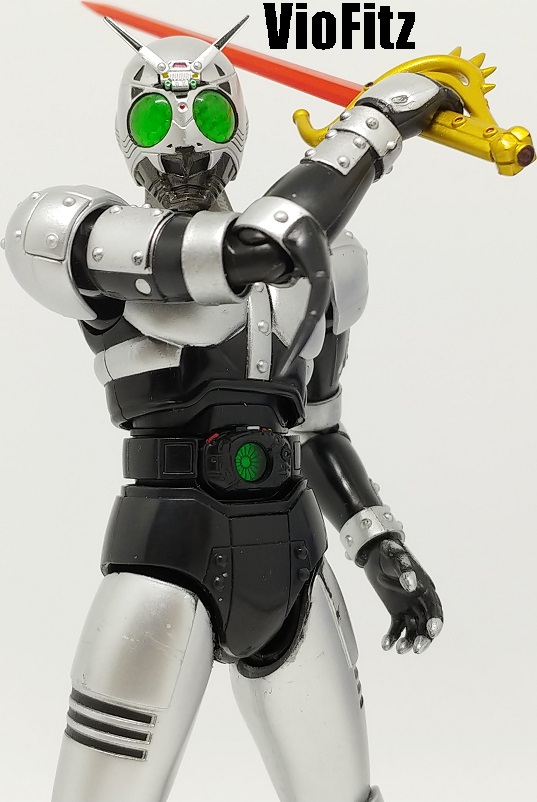 Now, where’s your overconfident?! TAKE THIS!!

You know shits gonna get real!!

Shadowmoon: “My path is long… I will hunt BLACK!!”

Thank you for reading!