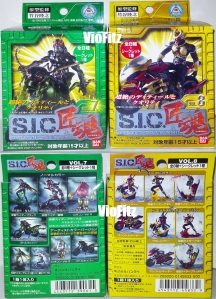 Hey guys what’s up? My review in here will tell about S.I.C. Takumi Damashii Kamen Rider BLACK & BLACK RX! They are similar to its parent model S.I.C., they both take works created by Ishinomori Shotaro but TD’s are different because they are a lot smaller and are statuettes which are sculpted in a pose already. Just like S.I.C., after the bike set TD’s allowed the figures to have different poses. Moreover, S.I.C. Takumi Damashii featured as a set, which contains various character, such as Kamen Rider, Kikaider, and many other featured characters. The set also offers color variation for the character figure, aside from secret character that can be obtained in every set. As of 2009 the series has span up to 10 volumes with 3 special volumes & 1 archive. Kamen Rider BLACK was packaged in a green colored box titled Vol. 7 released somewhere in 2006 whereas Black RX in a yellow colored box titled Vol. 8 and released in 2007, their stuffs are hidden in the box since they’re trading figure so, to get them it depends from our luck. However, since I bought them in open box conditions, I have no trouble to buy them depending on my luck. Each of them were packed unassembled, so we have to assemble them.

Here we got a diorama stand for Black, alternate back pad with wings, & additional arm part for Battle Hopper.

Now, this is how Black supposed to be looks after we assembled him, so far… The figure is made from PVC (Polyvinyl Chloride) mainly & the height was probably less than 3 inch, quite a small figure… But, the details are superb I must say… Bandai did a pretty nice job on Takumi Damashii. TD Black has his alternate color version on this, which he’s painted Green exactly like his variant color from S.I.C. Shadow Moon & Another Shadow Moon, & the diorama was painted brown. 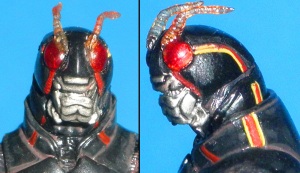 Now, let’s have a look on his helmet Sculpt, quite neat for a small figures. His head is pretty simillar to his normal S.I.C. version, although there’s a slight little differences. Another interesting part is, his neck was added an articulation making him be able to turn his head from right to left, & the neck joint was meant for his Battle Hopper pose. There’s also another articulation on his head, this is just for open mouth feature. If you ask me, it’s not really necessary, because I can hardly see his open mouth since it’s too small…

Now, we get to see how he looks from side to side, I really loving how Bandai made him… Black does surely looked organic & wicked, every sculpt is made unbelievably tremendous. From his scratches on his organic arms with his grasshopper spikes were also there & the hands was also made really scary… Same goes to his legs, apparently there’s a transparency on his right leg since I can see the back of his right leg like a glass. However, the left one has no transparency at all, but it’s not really necessary since we can hardly see their difference. On his body there’s also a movable grasshopper legs, which can be detach I guess since I never try it. The back view, he got an additional back pad for his grasshopper’s wings, again… The sculpt of his wings are undeniably awesome, & they looked real, Black also looked more organic with his wings. 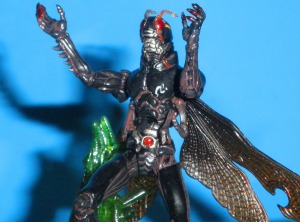 Not even that, Black got an articulations on specific part, here we can spin both of his shoulder clockwise. His waist is also movable to rotate 360 degrees. The legs can also movable but very limited, & if we move them too wide the joint will be easy to loose. Well, that’s all he got for his articulations. 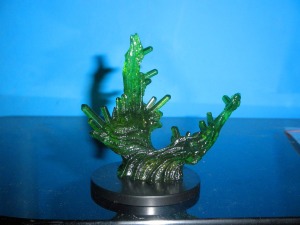 His parts contains a diorama thing, it is a grass looking shape diorama from how it looks in my opinion. Personally, I don’t really like it much, since it looks odd & it’s more like a coral & mucus…. On his diorama there’s a gibbosity sculpt in order to attach Black’s feets.

Surely, Black’s back was originally had his normal back pad without wings after we opened him outta the box. In which we can switch them to his wing’s version. He was also included an interchangeable shoulder arm parts for him, this parts was for his pose riding Battle Hopper. Unfortunately, I don’t have my own battle hopper by now, & I’m still searching for it. So I only made a pose how he supposed to be looks when he’s riding battle hopper, his wrist can be rotate it 360 degress. But, don’t be happy with this much, he can only pose like this on his Battle Hopper, not completely riding on it. Which is lame in my opinion….

Now, we go to Black RX, he got a diorama stand featuring his arch enemy Jak Shogun, this includes weapon & his cape, & finally an Fx slash part for Revolcane. There is also an alternate color for TD Black RX, which he’s painted white like Another RX, whereas Jak Shogun’s diorama was painted fully red, & the revolcane effect was colored green.

There, this is how they looks after we assembled them… The figure is also made from PVC (Polyvinyl Chloride) & the height was also less than 3 inch. But again, outstanding details & epic pose they got.

I actually, got a same thought on this like how I reviewed Black’s Helmet Sculpt. But unlike Black, his head has no articulations at all.

Black RX is also simillar to his normal S.I.C. counterpart, but still… There’s a slight little difference too, mainly on the coloring wise. Yes, once again unlike Black… Black RX has no articulations at all but his right shoulder. His right shoulder can be move clockwise, & the rest of that… He’s just a mere statue, but the pose looked really epic as hell… Here, Black RX is shown slashing Jak Shogun’s chest, the fx looked really cool although it’s still feel lifeless to me, screw up it’s just my personal taste… Also there’s an attachment joint in specific area for connecting the part each other.

Yay, we get to see S.I.C. versions of Jak Shogun here!! XD The sculpt is awesome, although he’s only a half size. From his looks, I think he ain’t that different from his TV counterpart… Before we assemble him he got an extra part such as cape & weapon to be attach. Man, I like this diorama better than Black ones.

Overall, I really like them, although some of them are just a mere statue… Well, I guess this review will also became one of the few review of S.I.C. Takumi Damashii in English, since It’s hard to find the review of them for me. Hope this will help all readers & collectors(who wants to hunt them) to have a chance reading a review of them. & These 2 marked to be my 1st owned S.I.C. Takumi Damashii’s collections, quite happy with them but also dissapointed in the price matter & being a mere statues… This is actually something that I wouldn’t want to do on buying unarticulated figures, but again… Those Black design made it again to mesmerized my eyes.

Pros: Still like my other thought on S.I.C., they only good from their design & some material, nothing more fancy…
Cons: Some painting aren’t primmed well on certain part, also to attach Black with the diorama stand isn’t that easy for me, yet again the right leg is easy to loose. Same goes on attaching Jak Shogun’s cape & weapon but a little easier than Black one… & lastly, very limited articulations on Black!

Thank you for reading! 🙂